As I sat and enjoyed lunch on Saturday to celebrate my father's birthday, I stumbled across the local paper, the Keighley News. Keighley is my hometown, but I hadn't read the paper in a few years so I had a quick flick through

I came across an article about the local brewery, Timothy Taylor and their Jubilee Beer ( to mark Queen Elizabeth II 60th year on the throne) 'Raise a Glass to a Diamond Ale
The article talks about how their famous Competition Ale, Landlord, gained it's name this way;

“The new ale was based on Taylor’s BB, a beer occasionally brewed in the 1930s to a superior bitter recipe, and was launched onto the market as ‘Competition Ale’.
“The competition was for drinkers to come up with a suitable name for the new beer. It was won by the steward of the Drill Hall Club in Keighley, who won £500 – £10,000 in today’s money – for naming it Landlord. Little did anyone realise that Taylor’s had given birth to a beer that was later to achieve virtual cult status and even become a favourite for celebrities, including Madonna.”
In fact this year the brewer is running a similar competition .
So of course that got me thinking about the true history of Crowdsourcing - after all it didn't come into existence purely as a result of the excellent book,  The Wisdom of Crowds: Why the Many Are Smarter Than the Few.

So as fast as you can say,

The Wisdom of Crowds: Why the Many Are Smarter Than the Few

, I came across this infographic 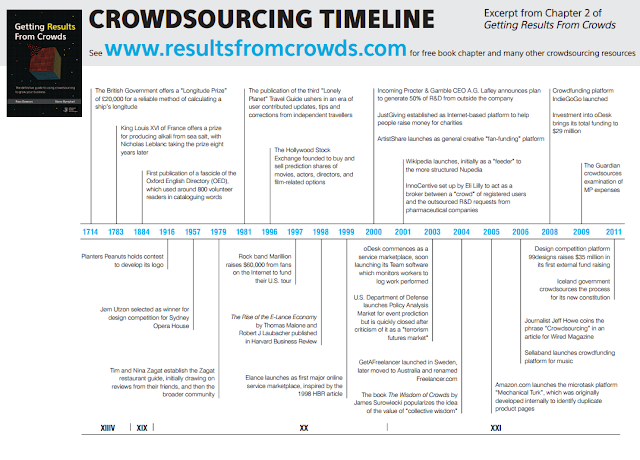 And there's many of the digital natives thinking they had invented it.

There are free chapters of the book available at www.resultsfromcrowds.com

And this reminded of me of a post I wrote last year on Crowdsourcing from which there is a useful link to crowdsourcing.org where there are some very useful lists of crowdsourcing projects and infographics